Since 2017, more and more capital has begun to pay attention to the field of industrial robots. Industry financing news has also frequently screened, capital and entrepreneurs have poured into this original “traditional” industry. This article is based on two aspects of industrial robots’ industry opportunities and challenges. 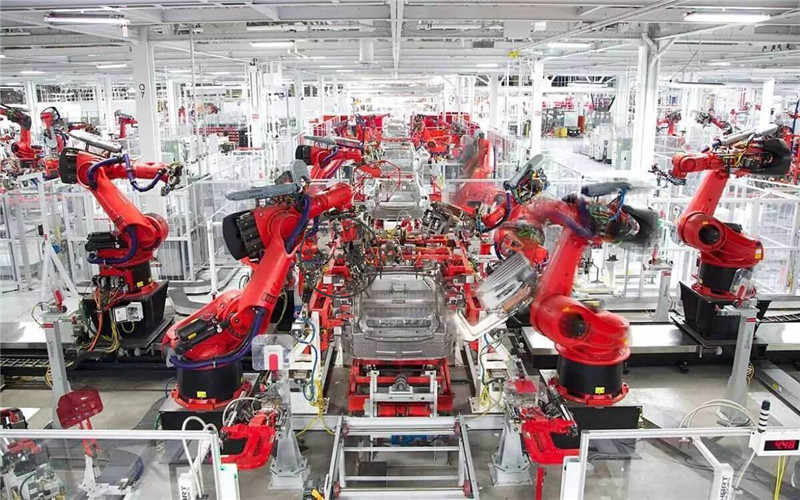 From the perspective of industrial trends, the compound annual growth has exceeded 20% since 2013; the increase in labor costs and policy guidance are driving the development of the industrial robot industry; from the perspective of capital environment, financing events in the field of industrial robots are frequent in 2017 and 2018; In the application, it is judged that the 3C field will usher in a round of outbreaks.

The annual sales growth of sales exceeds 20%. As shown in the following figure, the sales volume of Chinese robots has increased rapidly since 2013, with a compound annual growth rate of over 20%. In 2018, there are more than 140,000 units of shipments, according to the average selling price of 20 In the case of 10,000 calculations, the scale of industrial robots alone is as high as 28 billion. 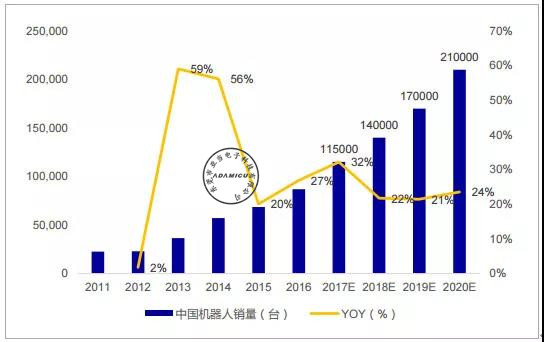 Rising labor costs: With the disappearance of the demographic dividend, 80, 90 more and more pursuit of a comfortable working environment, the labor costs of the manufacturing industry continue to grow, the National Bureau of Statistics announced the average annual salary of the employed persons in the above-scale enterprises in 2017 Happening. According to the report, the average wage of the Chinese manufacturing industry is 58,049 yuan, which has lost the advantage of labor cost compared with Southeast Asia. Therefore, the rise in labor costs has forced the development of industrial robots.

Policy guidance: At the national level, policies such as “Made in China 2025”, “Robot Industry Development Plan (2016-2020)” and “Industrial Strong Foundation Project” have been promulgated, and the target of China’s industrial robot density is planned to be 150 units/person by 2020. 200,000 units and 100,000 units of independent production will promote the development of the industrial robot industry.

Capital is paying more and more attention to industrial robots belonging to the manufacturing industry.

Industrial robot application in the 3C field is a small explosion

3C products include parts manufacturing technology including casing, glass and cover, as well as complete machine assembly technology. The process and equipment are mature, the processing content is high in repetition, labor intensity is high, and it is in line with the characteristics of automation transformation. The current situation in China is that the degree of automation is still at a low level.

For example, at present, the density of robots in the domestic 3C industry is only 11/10,000 employees, while the density of robots in Japan and South Korea has already exceeded 1,200/10,000 employees. The market capacity growth trend is obvious. According to the research results released by the “Grassroots Research”, the current comprehensive level of assembly, testing and packaging in the back end is less than 15%, and there is still much room for improvement in automation rate, and will become a major concern of major enterprises in the next few years. field of.

From the perspective of market size, 3C industry is the largest market after the automobile industry. China is a big 3C manufacturing country. About 70% of the world’s electronic products are manufactured and assembled by China. The industrial robots of 3C industry can be effectively reduced. Labor costs, increase work efficiency, and reduce costs. In contrast, the automobile industry has a high maturity, limited incremental space, and is basically monopolized by the four major families. 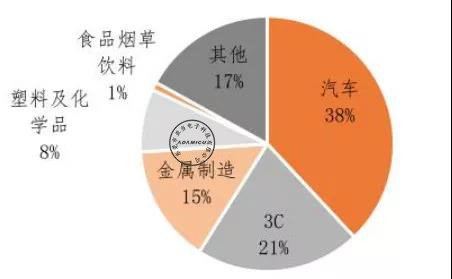 First, the core components occupy 70% of the cost of the body, but rely heavily on imports.

From the perspective of cost structure, industrial robots consist of control systems, drive systems and actuators, which correspond to core components such as controllers, servo motors and reducers. From the perspective of cost, core components account for about 72% of the cost of industrial robots. Domestic manufacturers of the same core components should purchase the reducer at nearly four times the price and purchase the servo drive at nearly twice the price. Among them, the motor and reducer are heavily dependent on imports, and the controller field is gradually localized.

In the domestic servo motor market: the top three Panasonic, Mitsubishi, and Yaskawa are all Japanese brands, with a total share of 45%. European brands such as Menzi, Bosch and Schneider occupy high-end, with an overall market share of around 30%, and the overall domestic market share is low. At 10%;

In the domestic controller market: FANUC, Yaskawa, ABB accounted for nearly 40% of the market, Epson, OTC, Stäubli and other second-tier companies accounted for 44% of the market. The gap between China’s controllers and foreign countries is small, the hardware has been mastered, and there are still gaps in the stability, response speed and ease of use of domestic brands in software.

Second, in the long tail market, the ontology and integrators are combined to form a “ontology integrator”

China has a car with a very concentrated head such as 3C, but it is more general industry, and its industrial integration is very low.

In a decentralized market environment, the customer’s demand is often the efficiency of welding, palletizing a single link or replacing labor. The requirements for understanding the on-site process flow are not high, and the integration difficulty is low. In the long tail market, the value provided by a single integrator or ontology vendor is relatively low. Therefore, the combination of the ontology and the integrator has become the industry’s choice and become the “ontology integrator”.

When the profit margin is low, the big environment is the tight credit resources, and the financing cost is high, when adding new industrial robot equipment, the price/performance ratio is the key point. The core indicator is the equipment investment return cycle.

The small transformation of a single link is caused by the price of the industrial robot, which is not in the range of hundreds of thousands to several million. However, each project requires the matching of engineer resources, and it is one of the best swords to improve the profitability of engineers. This poses a challenge to project deployment, which reduces deployment time and reduces core engineer resource participation, thereby reducing costs.

Unlike large-scale customers in the automotive field, employees have a high level of cultural literacy and can have full-time staff to participate in pre-training of equipment use. Long tail customers do not have the patience to learn complex buttons and operating instructions. The fool-like operation is king. The easy operation of human-computer interaction is one of the points that the ontology integrator needs to continuously optimize.

At present, the industrial development of the industrial robot field is welcoming the golden age, and it has also attracted a lot of capital attention. Among them, the application of the 3C field is one of the key directions worthy of attention. At this stage, in addition to the controller, the reducer and servo motor also received the constraints of the four families.