The tide of industrial robots is approaching, where is the cable/connector road in China?

Home/News/Product news/The tide of industrial robots is approaching, where is the cable/connector road in China?
Previous Next

The tide of industrial robots is approaching, where is the cable/connector road in China?

As a cable and connector manufacturer that provides internal connections to robots, it is natural not to miss this promising sunrise area. At the same time, industrial robots are undergoing continuous iterative upgrades of technology, which will inevitably bring about tremendous changes in the field of wiring and connectors, which will bring revolutionary prospects for the entire connected device. 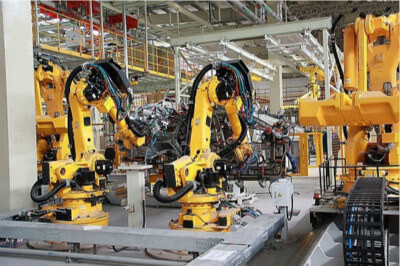 The turning point of the demographic dividend is coming, and the rise of the “machine substitution” wave has led to a large number of companies entering the robotics industry. Among them, the Chinese market is very eye-catching. By 2018, China has become the largest consumer of industrial robots for five consecutive years.

Industrial robots appeared in the 1960s. After decades of development, they have been continuously updated and developed at a faster rate. This is due to the development of technology and the demand of the industrial production market. Industrial robots are gradually moving from simplification to complex multi-functionality. At present, the replacement of labor by machines has become a trend, and I believe that industrial robots will flourish.

As far as China’s current economic development is concerned, the changes in population structure and the increasing labor costs have led many companies to introduce industrial robots for industrial production and processing. Firstly, it can improve the efficiency of production and guarantee the quality; secondly, it can reduce the production cost and has obvious advantages in the competition; in addition, it is easier to manage and more suitable for future production. Therefore, the demand for industrial robots in China will become larger and larger.

However, China’s robotic products are intensive in the low-end sector, and the overall competitiveness is not strong. In the market, local companies basically rely on low prices to maintain their own advantages. At the same time, the international four major families are well-positioned in the Chinese market, and the competitive pressure faced by domestic robot companies is also great. At the same time, the robot body faces the risk of price cuts, and the market competition is more intense.

According to the preliminary statistics of the Ministry of Industry and Information Technology, there are more than 800 enterprises involved in the production of robots in China, of which more than 200 are robotic body manufacturing enterprises, most of which are mainly assembled and processed, at the low end of the industrial chain, and the industrial concentration is very low. The overall size is small. According to the Japan Robotics Industry Association, orders for industrial robots in Japan increased by 27.8% in 2017 to reach 944.7 billion yen.

However, in order to change this situation, China’s “Made in China 2025” strategy clearly proposes the development plan of CNC machine tools and robots.

It is understood that by 2020, more than half of the world’s new industrial robots will be installed in China, and robots made in China will also occupy a considerable proportion. As a component for robots, the development of robotic cables and connectors is required. Space should not be underestimated. The industrial robot industry is booming in China and is attracting more and more interest from cable and connector companies.

Wire and cable as an important part of the robot, the market demand has exploded, wire and cable companies will usher in rare development and transformation opportunities.

In general, cable and connector companies that are currently entering the field of industrial robots are mainly foreign-owned, but domestic companies have already targeted this market.

Driven by factors such as the growth of downstream robot shipments, the widening of global supply gaps in cable connectors, and the maturity of domestically produced technologies, domestic cable connector companies are welcoming rare opportunities for development.

However, it is understood that more than 80% of China’s current robot market uses imported cables and connectors. In this market, foreign companies are far ahead. For example, FooConn has invested a large amount of funds in research and development, and its products have been applied to servo drives such as Mitsubishi, Yaskawa, Panasonic, Delta, Sanyo, Omron, Eston, Huazhong CNC, and Guangzhou CNC.

There is also great potential in import substitution, but it is still too early. In addition to the price and longevity of domestically produced cables and connectors, there are still problems with the product series being unsound and consistent. The performance of some products in the actual use environment does not match the laboratory performance, hindering the localization process.

As a carrier and an important component for transmitting power and control capabilities, robotic cables are especially important for robots. The robot cable is like a central system to humans. If there is a problem with any loop, the whole system will not function properly. Due to the often harsh environment, robot cables must have a range of special features.

Industrial connectors have strict requirements for reliability, IP rating, operating temperature and shock resistance, and even many indicators require automotive and even military standards. As a result, the original factory needs a longer cycle in the development of new products, more considerations and more stringent tests, and higher research and development costs, which greatly test the comprehensive strength of the manufacturers.

In many operating environments, it is not possible to connect the robot and only transmit signals to the robot via a wireless connection. Obviously, compared with the traditional connection method, the development of industrial robots will inevitably bring about tremendous changes in the connector field, and this new development will also feed back other areas of connectors, which will revolutionize the entire connected device. Progress prospects.

The rapid growth of the Internet of Things (IoT) has driven the widespread demand for networked sensor arrays that need to communicate over a wireless mesh network to monitor many factors in the production environment, such as temperature, humidity, lighting, asset tracking, and assets. Management, etc.

It can be seen that the improvement of the demand for wireless interconnection technology by Industry 4.0 has brought new opportunities to connector manufacturers. In recent years, manufacturers such as TE and MOLEX have also begun to expand the direction of product design from “wired” to “wireless”.

In addition to the expanding needs of “wireless” technology, product “customization” is particularly important in the industrial sector. Industry insiders know that traditional connectors and cables are mostly passive products, and manufacturers can provide standardized products to customers.

In recent years, the demand for “customization” of industrial connectors has become increasingly obvious. Compared with “standardized” products, “customized” products require companies to have a stronger design and development team and a wide range of connectors to facilitate rapid Assembled into a complete solution to meet market needs.

The customer’s “customized” needs will exist for a long time, especially in the new application areas such as automotive electronics, Internet of Things, smart homes, etc., and require new solutions. Working closely with our partners, we are able to meet the “unique” requirements of our customers while maintaining a high level of product quality. This is the job of the connector supplier.

With the development of intelligence and digitalization, the demand for innovation in industrial connection is becoming more and more stringent. For example, in the realization of system flexibility, a large number of plug-in cables and interface methods need to be turned into a non-contact flexible mode.

The cable not only has heat resistance and flame retardancy, but also has excellent bending resistance and flexibility to meet the requirements of the movable portion of the industrial robot that can withstand repeated bending and twisting.